Laser Caps for Hair Growth – do they actually work? 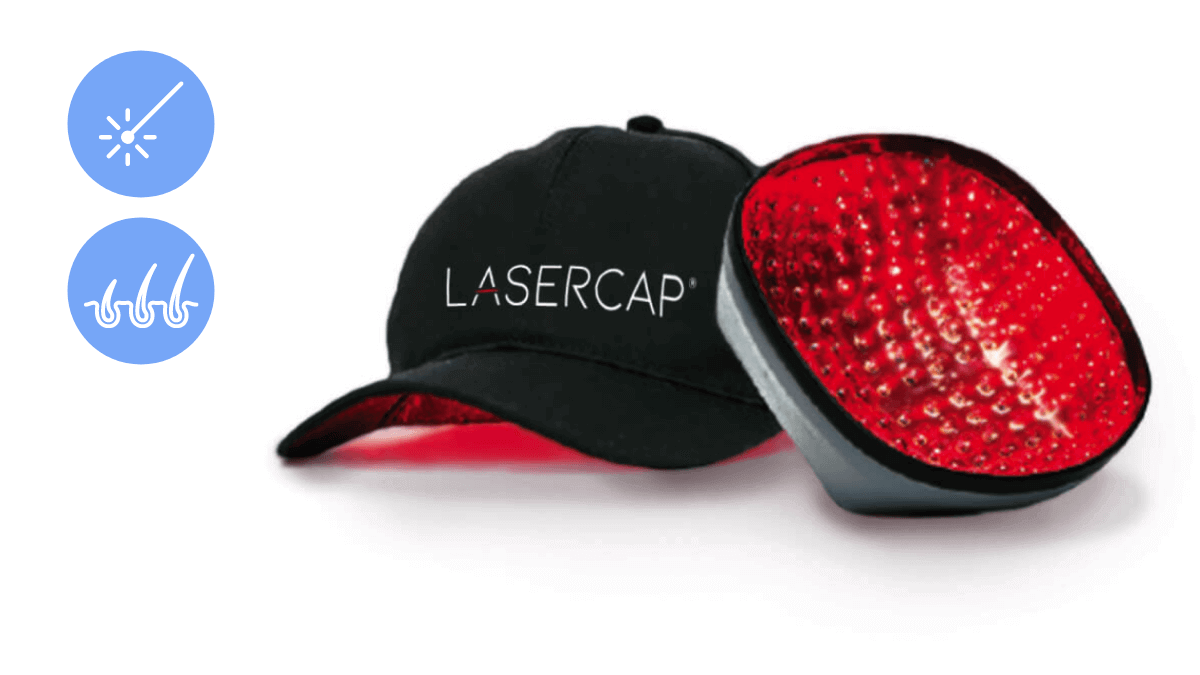 ➡ Laser caps are an alternative method for battling MPB, a home-use version of the Low-Level-Laser-Therapy. They don’t directly promote hair growth but shoot rejuvenating lasers into your scalp, and these red lights strengthen the cells responsible for hair growth.

➡ Laser caps are very efficient in supporting your hair’s regrowth. However, they do not directly help you grow hair in advanced balding areas.

➡ As this is a more minimal option of the LLLT, it contains less effectiveness but similarly fewer risks. Regardless, you should consult your doctor beforehand.

➡ In all studies and patient reviews showing its effectiveness, the successful cases are always the ones where laser caps are not used primarily but secondarily to more prominent methods for battling hair loss.

Hair loss is a problem experienced by millions, if not billions of people worldwide.

Especially if you have pattern baldness, which is the cause of 95% of all hair loss in men, you start to see your hairline receding and your hair thinning in your 20s and already have completely bald spots by your 30s.

Since it is such a common issue that affects not just your appearance but your confidence, psychology, and dating life; there are many treatments and products claimed to cure baldness.

In this blog, I want to talk a bit about laser caps that are getting more and more popular for treating hair loss:

I’ll talk about what it is and how it works before going over the studies and reviews to help you decide whether or not you should get one.

What Is a Laser Cap?

A laser cap is basically a wearable cap that has a layer of laser diodes on its inner surface. These laser diodes project light into your scalp either in continuous or pulse motion (depending on the product).

It can be considered as the home-use version of the Low-Level-laser Therapy various clinics offer, the biggest upsides being its convenience and cost.

How does it work

The intensity and the way laser caps work differ from brand to brand.

The LaserCap, the leading brand on the market, uses a 650nm red light in each of the diodes, and this light, which you could call full of photons, penetrates into the middle layer of the skin called the derma or dermis, where hair follicles (roots of your hair) are located.

The photons that penetrate into your skin are then absorbed by your cells and converted into a form of energy that promotes cell rejuvenation and hair growth.

So, it doesn’t directly promote hair growth, but actually strengthens the cells that are responsible for hair growth.

Most brands recommend 30 minutes of use every day to see results and claim that visible hair growth happens somewhere between 6 and 12 months.

Although laser caps are more recent inventions, the technology used in one isn’t quite new.

It was invented in the 1960s by the Hungarian physician Endre Mester. Mester projected low-level lasers to mice that were shaved and noticed that hair growth was much faster with laser projection than without it.

Low-Level Laser Therapy (LLLT) was cleared as a safe treatment for pattern balding, in 2007 for men and in 2011 for women. And since then, many clinics have adopted LLLT for treating hair loss and promoting hair growth in both men and women.

There are a number of studies that suggest LLLT is effective in promoting hair growth and stopping hair loss. Now LLLT and laser caps are of similar category, but not directly the same, which I’ll explain after going over the data on LLLT.

Is LLLT Effective for Hair Growth?

LLLT has been proven effective in promoting healing and recovery processes by various studies before, but the evidence around promoting hair growth isn’t as solid.

A 2013 study performed on mice found out that LLLT was highly effective in promoting hair growth, but in mice with chemotherapy-induced alopecia and in alopecia areata, not in pattern baldness a.k.a androgenetic alopecia.

A 2015 study also found LLLT to be effective on female patients with hair loss, but it’s not the most trustworthy research due to the information being provided by an LLLT clinic instead of an independent researcher.

And more recently, a 2020 randomized study conducted on 60 participants suggests that improved results were observed in men with androgenetic alopecia that underwent LLLT compared to the control group who used a sham device.

Aside from the 2020 study, most research on LLLT doesn’t offer conclusive data and results, but it is clear that it is safe to be considered as a solution to try.

The thing is, the studies I’ve just mentioned don’t prove the effectiveness of Laser Caps.

Yes, LLLT and Laser Caps use the same technology, but they aren’t the same tools.

In fact, LaserCap, the brand that claims to have a “prescription strength” technology uses both lower power and wavelength than the 2020 study I’ve mentioned above.

So the bigger question is, are laser caps effective in treating AGA?

This 2020 study on laser caps, specifically REVIAN Red, suggested that the product was effective BUT the credibility of the research is significantly reduced by the fact that the trial was sponsored was the company that made the product itself.

The International Society of Hair Restoration Surgery (ISHRS) also suggested patients reconsider choosing laser caps since the studies are limited both by sample size and credibility.

For me, I recommend using laser caps in addition to clinically proven medications or treatments such as minoxidil, finasteride, and hair transplant surgeries.

So, the short answer would be that yes they can help, but they’re not a solid treatment alone for battling androgenetic alopecia.

Side Effects and Complications of Laser Caps

There aren’t significantly adverse side effects of using laser caps, but there are a few side effects you need to consider.

First of all, once you start using laser caps, you should expect to see an instant increase in hair shedding during the first month of usage. This is a side effect of almost all hair growth products and is a sign that new and healthier hair will grow out to replace the hair that fell out.

Also, many patients suggested that laser caps also cause skin irritation, dryness and itchiness on the scalp, and an increase in skin sensitivity.

Laser caps are FDA-cleared devices that don’t have serious or permanent side effects like other products and treatments that are meant to stop hair loss.

If you want to try laser caps, consult a dermatologist beforehand, and make sure you monitor your scalp and hair health closely during usage to understand whether or not it is making things worse.

What do patients say? (A curation of hair loss laser cap reviews)

An honest review of a product always helps us in making our own decisions, especially if these reviews are from people that are in the same situation as you.

I’ve browsed Reddit, where there are various communities focused on hair loss with people passing down their experiences and regimens for battling androgenetic alopecia.

Here are some interesting success stories regarding laser caps:

Reddit user Talos47 said that he’s been using a laser cap for 2 years, and agrees that laser caps alone don’t provide great results, but can help a little by thickening existing hair.

Reddit user kbro337 has been using Finasteride for the last one and a half years and added laser caps to his regimen 6 months ago, which has drastically improved his hair thickness contributing to great results combined with other treatments.

There are also a significant amount of female users for laser caps out there, and Reddit user ryounis is one of these people who shared their results with the world.

You can clearly see new hair growth in balding areas in just 4 months.

Restore Your Natural Look with a Dermatologist:

Laser caps alone can’t help you achieve the results you want. But, if combined with other treatments, it can help improve your results, as it is for certain that LLLT can boost cell rejuvenation and growth.

Whatever your situation is, it’s best to proceed with a professional, in the case of skin and hair, a dermatologist.

In UnitedCare, we bring a holistic approach to hair restoration with expert staff, advanced technology and techniques, and a principle to put health and safety first.

UnitedCare’s expert dermatologists provide you with natural and technological options:

Does a laser cap grow hair?

Studies regarding laser caps and their effects on hair growth are inconclusive, even though laser therapy is proven to promote cell health. Most hair loss patients see the best results when they combine laser caps with other proven treatments such as minoxidil, finasteride, or hair transplants.

How long do laser caps last?

The laser cap as a product can last years with proper usage and a battery replacement, and the effects of the laser cap should last as long as you keep using the product.

Can I use my laser cap every day?

Yes, you can, but we’d strongly suggest you don’t. Most brands define the ideal usage frequency as “every other day”, and using more frequently than that can have adverse effects on your scalp and hair.